On May 12, 2022 the President’s Council of Advisors on Science and Technology (PCAST) held a meeting to discuss challenges and opportunities for U.S. leadership in semiconductors.

08/09/2022 10:00 AM
The President delivers remarks and signs into law H.R. 4346, the CHIPS and Science Act of 2022; The Vice President, the Secretary of Commerce, the United States Trade Representative, the Director of the Office of Management and Budget attend

“’The Biden administration is already supporting alternative facilities in places like South Korea and Israel. But these locations are still far-flung, and Seoul’s sea lanes would be equally affected by an invasion of Taiwan. Reshoring semiconductor manufacturing is the top concern in the U.S.-China technology relationship, and it’s not close.”

Ryan Fedasiuk, a research analyst at CSET, told Defense One. (1)

As corruption is sending shock waves through China’s chipmaking industry, President Biden signs the CHIPS and Science Act of 2022 into law in the White House Rose Garden.  About $52 billion would go to microchip manufacturers to incentivize the construction of domestic semiconductor fabrication plants.  “Of those funds, $39 billion are earmarked to ‘build, expand, or modernize domestic facilities’ for chip-making.  The remainder…is set aside for research and development. This money appears designed to alleviate a rift that had been developing between semiconductor companies like Advanced Micro Devices (AMD), Qualcomm (QCOM) and Nvidia (NVDA), which had focused on designing — but not manufacturing — these crucial chips and were worried about being left out.” (2)

Following are the fab projects which have been previously announced and will commence groundbreaking activities once the $52 billion semiconductor manufacturing subsidy known as the CHIPS Act is signed into law.

Qualcomm to spend $4.2 billion more on chips from GlobalFoundries:  “Qualcomm (QCOM.O) agreed to buy an additional $4.2 billion in semiconductor chips from GlobalFoundries’s (GFS.O) New York factory, bringing its total commitment to $7.4 billion in purchases through 2028, according to a filing released Monday.  GlobalFoundries Chief Executive Thomas Caulfield said in a statement that having Qualcomm as a long-term customer of its upstate New York factory would help, along with federal and state funding, to expand the company’s U.S. manufacturing footprint.” (5)

In 2008, Advanced Micro Devices (AMD) spun off its entire chip manufacturing operation to an Abu Dhabi-based investment fund, which according to ZDNet at the time of the deal, committed to “invest $6 billion to finance a new factory near Albany, NY and to upgrade an existing plant in Germany.” AMD would own 44 percent of the joint venture, which became GlobalFoundries.

This move by AMD came at a time when companies like Texas Instruments (TI) were moving away from internal process development to attempt to keep up in-house with Moore’s Law and started working with foundries, part of an industry-wide response which included alliances (like AMD and the Abu-Dhabi-based investment fund) and consortia for cost-sharing. Back in 2009, reports put the cost estimate for the development of the 0.065-micron generation of semiconductors by one firm at $1.5B. (6)

Chip and carmaker CEOs meet ahead of Biden signing

Ten days ago, we took delivery of the land in Ohio for our new Mega fab. We have equipment in place and have started prep work for beginning major construction, but … we are still waiting on Congress to act. pic.twitter.com/HC8F8cYPoI

Taiwan’s GlobalWafers’ announced a plan to build $5 Billion Plant in Sherman, Texas (3):   “Amidst the global chip shortage, Taiwan’s silicon wafer manufacturer GlobalWafers Co., Ltd. has announced that it will invest $5 billion in a manufacturing plant. The wafers, often used in manufacturing semiconductors, would also generate as many as 1,500 jobs in the town of Sherman, Texas and it is the first U.S. silicon wafer facility in more than two decades. According to the company, the new plant will manufacture 300 milimetre silicon wafers and would be completed later this year.

‘300-millimetre silicon wafers are the starting material for all advanced semiconductor fabrication sites, including recently announced United States expansions by GlobalFoundries, Intel, Samsung, Texas Instruments and TSMC,’ said the Taiwanese chipmaker. ‘Most of these wafers are currently manufactured in Asia, forcing the US semiconductor industry to highly rely on imported silicon wafers.   The construction which will eventually span 3.2 million square feet is scheduled to start this year with production beginning in 2025.’” (4)

Also in June 2022: Intel delayed a “Mega-Site Groundbreaking” as Congress stalled on the funding of the CHIPS Act (see below for Intel’s initial announcement of the fab site in Ohio).

Chip makers stall new US plants until Congress unlocks $52B in funding:  As reported by Fortune in June:  “In 2020, Taiwan Semiconductor Manufacturing Corp. (TSMC), the world’s largest contract chip manufacturer, announced plans for a $12 billion plant in Phoenix to produce its most advanced chips. But TSMC CEO Mark Liu made it clear development would go ahead only if the government could ‘make up TSMC’s running costs difference between the United States and Taiwan.’  The State of Arizona approved at least $200 million in public infrastructure funding to support TSMC’s factory operations in Phoenix, including spending on roads and sewage systems. In June, TSMC said construction of its Arizona fab, which is ongoing, was proving to be more costly than the company anticipated and called for Washington to extend CHIPS support to foreign firms.” (8)

A rendering shows early plans for two new leading-edge Intel processor factories in Licking County, Ohio. Announced on Jan. 21, 2022, the $20 billion project spans nearly 1,000 acres and is the largest single private-sector investment in Ohio history. Construction is expected to begin in late 2022, with production coming online at the end of 2025.
(Source: Intel Corporation)

Intel has been heavily lobbying for the passage of the CHIPS Act to partially fund new factories, including a new $20 billion factory near Columbus, Ohio:  “Intel…announced plans for an initial investment of more than $20 billion in the construction of two new leading-edge chip factories in Ohio. The investment will help boost production to meet the surging demand for advanced semiconductors, powering a new generation of innovative products from Intel and serving the needs of foundry customers as part of the company’s IDM 2.0 strategy. To support the development of the new site, Intel pledged an additional $100 million toward partnerships with educational institutions to build a pipeline of talent and bolster research programs in the region.” (10)

Taiwan Semiconductor Manufacturing Co. and Samsung, which are building plants in the U.S., also have been lobbying to pass the bill as soon as possible. Chipmakers have said failure to pass the bill would lead to delays in starting the plants.

Commerce Secretary Gina M. Raimondo released a statement lauding Samsung for the company’s commitment to build a $17 Billion chip fab in Taylor, Texas: “Increasing domestic production of semiconductor chips is critical for our national and economic security, and we look forward to continued partnership with Samsung and other semiconductor manufacturing companies looking to build out their capabilities in the U.S.”, said Raimondo.

Earlier in the month, Ford Motor Company committed to chip collaboration with GlobalFoundries, including the expansion of manufacturing.  According to a joint press release, the partnership also commits to “joint research and development to address the growing demand for feature-rich chips to support the automotive industry. These could include semiconductor solutions for advanced driver-assistance systems (ADAS), battery management systems, and in-vehicle networking for an automated, connected, and electrified future.  GF and Ford also will explore expanded semiconductor manufacturing opportunities to support the automotive industry. The announcement is consistent with both companies’ commitment to building innovative business relationships to regain supply-demand balance for chips in the auto industry as well as efforts to further accelerate technology innovation for the U.S. auto industry.”

Taiwan Semiconductor Manufacturing Company (TMSC) to build a $12 billion chip factory in the U.S.:  “TMSC…will build a semiconductor facility in Arizona, as concerns grow in Washington about the security of the technology supply chain which is largely centered in Asia.  Total spending on the project will be $12 billion with TSMC claiming it will directly create 1,600 jobs. Construction is planned to start in 2021 on what would be TSMC’s second manufacturing site in the U.S. The factory will be focused on producing so-called 5-nanometer chips, the latest in semiconductor technology being manufactured today.”  (9)

In 2021, semiconductors helped steady a world wobbled by COVID-19, and the industry’s future has never been brighter. As semiconductor innovation and global chip demand continue their inextricable rise, government and industry must work together to maintain America’s leadership in this foundational, indispensable technology.

While the semiconductor industry has achieved great success in 2021, it also faces significant challenges, such as:

With the 100% production overseas of the most advanced logic semiconductors as the linchpin of concerns over the long-term health of the global chip manufacturing supply chain, especially the world’s dependence on production in Taiwain, it is easy to forget the strong strategic metrics which the SIA report highlights, including:

This article is also very forward-thinking: 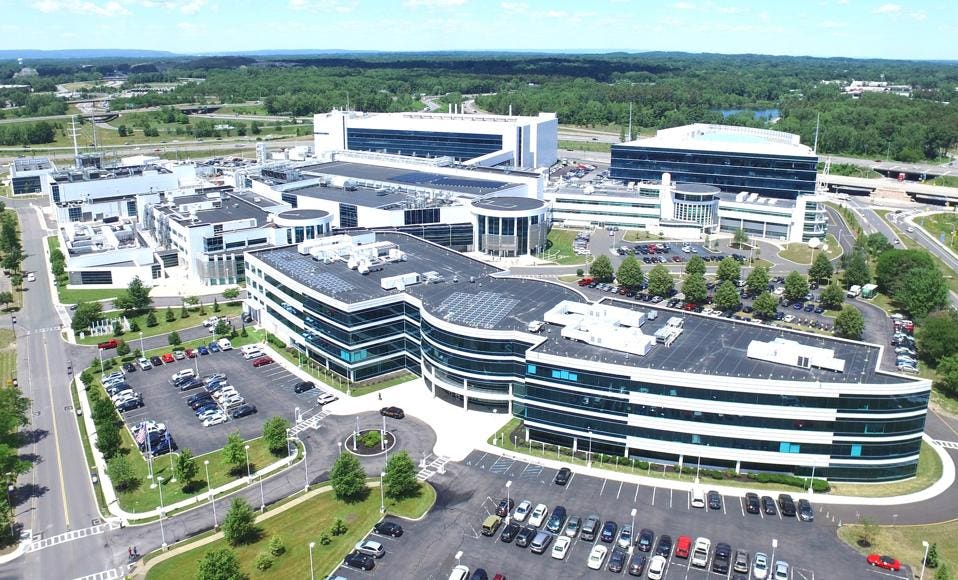