In July of last year, we followed up on OODA CTO Bob Gourley’s analysis of the Blueprint for a Blue Ocean with the question What Exactly is the PRC up to in the Arctic?  Climate change and climate-induced emergencies and crises are creating newly contested, geopolitical arenas.  The Arctic Region has one of the world’s smallest oceans, but because of where it is situated, it has the potential for connecting nearly 75% of the world’s population.  When you consider that 90% of all trade travels across the world’s oceans, this can be either a tremendous opportunity or an emerging vulnerability.  Additionally, the Arctic is home to 30% of the world’s undiscovered natural gas reserves, 13% of the global conventional oil reserves, and one trillion dollars’ worth of rare earth minerals. There is a lot at stake here:

The July 2021 report Exploring the Relationship between China’s Investment in the Arctic and Its National Strategy by CNA, provided a federally mandated update on Chinese activities in the arctic and the “Chinese Dream.” The report is part of a series that CNA produced to fulfill requirements outlined in the fiscal year (FY)2020 National Defense Authorization Act (NDAA), Sec. 1260E.

Conclusions and Recommendations from the CNA Study 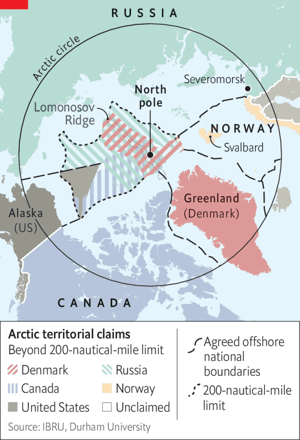 Since the CNA report was released, OODA Loop Contributor Emilio Iasiello look a look at the Arctic and China from the perspective of how cyber espionage is likely supporting China’s arctic aspirations:

“Based on its cyberespionage history, as China tries to entrench itself further into Arctic matters, Beijing is likely engaging in similar types of intelligence collection against other Arctic states. Unfortunately, there is little open-source reporting that details cyber threats, no less cyber espionage, and activities targeting the region.

This is not to say that it is not happening; the absence of evidence is not evidence of absence and given the breadth and expanse of Chinese cyber espionage, this lack of visibility is disconcerting. As a limited permanent observer nation, China lacks voting power reserved for the permanent eight-member Arctic Council, which means while it knows the concerns discussed by the Council, it has no authority to influence decisions or their outcomes.

Key issues like climate change, maritime rights, fisheries, pollution, and oil/gas/mineral exploration are ones of great interest to Beijing, particularly with respect to its economic plans like the Polar Silk Road, as well as other natural resources efforts.

As Beijing makes moves to assert itself in the Arctic, it will be important for it to understand the strategic interests of countries that surround the area, what their priorities are, and where they are willing to compromise. Ascertaining Arctic Council state positions would give Beijing a decision-making advantage from which to negotiate with and/or influence members or other states with observer status. That begins with targeting and exploiting the Arctic region leadership and the senior policymakers that support their respective heads of state and is exactly the kind of operation that an experienced and sophisticated cyber adversary like Beijing is adept at, and most likely currently, executing.”

“China has plans for a ‘Polar Silk Road’ and has invested more than $90bn in Arctic infrastructure and assets.”

The Economist also provided an update on how the war in Ukraine is changing the Arctic, concluding that “co-operation with Russia has collapsed—and China is ascendant”.  As The Economist Explains:

The chill winds from Russia’s invasion of Ukraine have reached the Arctic. On June 29th Russia’s foreign ministry said Norway would face “retaliatory measures” for imposing sanctions that block Russian goods destined for Svalbard, an Arctic archipelago. Svalbard is part of Norway, but a treaty from 1920 gives Russia the right to exploit its natural resources, and many of the settlements there are populated by Russians.

Even before this squabble, Arctic powers had already clashed over the invasion. On March 3rd, just a week after war broke out, seven of the eight permanent members of the Arctic Council, the region’s main intergovernmental organization—all bar Russia, the current chair—said they would boycott future meetings in light of the war. The council had long sought to portray the region as peaceful and cooperative: its founding document, the Ottawa Declaration of 1996, states that it should not deal with “military security”. But the war has pitted Western signatories (America, Canada, Denmark, Finland, Iceland, Norway, and Sweden) against Russia in the far north. How will the fallout affect the Arctic?

Climate change is raising the stakes. The Arctic is warming three to four times faster than the global average. The minimum sea-ice cover in 2020 was almost 2.6m square kilometers smaller than the average minimum between 1981 and 2010. The environmental consequences are grave. But there are geopolitical ramifications too. Polar sea routes are becoming more easily navigable, natural resources newly accessible, and northern frontiers increasingly vulnerable. Countries outside the region are turning their attention north. China has plans for a “polar silk road” and has invested more than $90bn in Arctic infrastructure and assets.

War in Ukraine has drawn attention to the military threat Russia poses in the far north. Severomorsk, a port on the Barents Sea within the Arctic Circle, is the main base of the country’s Northern fleet, which includes nuclear-capable submarines. Remilitarisation was well underway before the war because Russia’s natural polar defense, ice, is melting away. It has built at least 475 military sites along its northern border in the past six years. War is unlikely to break out in the Arctic: the terrain is too hazardous and the rewards too slight. But it could be drawn into a wider conflict. Heeding the threat, NATO has turned its attention northwards too. In March Norway hosted NATO’s biggest Arctic military exercise in more than three decades. America is considering revamping its armed forces in Alaska. When Finland and Sweden join the alliance, all Arctic countries but Russia will be NATO members.

Co-operation between Western and Russian scientists in the region has broken down. Research on climate change is the obvious victim. Business partnerships have also soured. Russia has invested heavily in oil and gas in the Arctic, announcing $300bn of incentives for new projects in 2020. But Western companies – including BP, ExxonMobil, and Shell – are pulling out. Italy has frozen its $21bn of financing for the Arctic LNG 2, an extraction project in northern Siberia.

“The new Arctic…looks set to pit NATO members against China and Russia.”

This makes way for Chinese capital. China is already pumping money into Arctic extraction. It has a 30-year contract with Russia to import gas from the Yamal fields, in the Siberian Arctic, via Power of Siberia 2, a pipeline due to be constructed between the countries. State-owned China National Petroleum Corporation has a 20% stake in Yamal LNG, a gas-extraction project; the country’s Silk Road Fund owns 10%. Other state-owned companies have also invested in Arctic LNG 2. And Russia will increasingly rely on Chinese technology to build Arctic liquefied natural gas tankers and other equipment, in place of Western firms.

Russia is wary of China’s interest in the region, where it sees itself as pre-eminent. China has no Arctic territory but its growing influence is shifting the balance of power there. The pretense that the region could stay above geopolitics has broken down, says Andreas Osthagen, of the Fridtjof Nansen Institute, near Oslo. Norway will take over the chairmanship of the Arctic Council in 2023 and Western countries will need to decide whether to proceed without Russia.  (1)