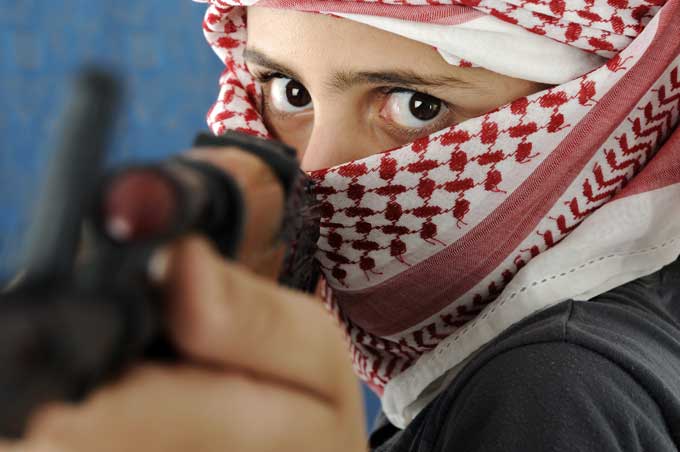 Old-fashioned paper propaganda is getting phased out. Taking its place is social media, a relative newcomer that is taking the world by storm. Social media’s open, web-based interactive formats allow for instant communication to an unlimited audience. The use of social media has dramatically risen in the last decade, especially among young adults. The monumental popularity and outreach capabilities of social media have made this sector a prime target for terrorist recruitment operations. Social media offers several huge advantages to terrorist groups. The Internet is easily accessible with cheap equipment and offers world-wide reach in an instant. Given the ease of incorporating these innovations, terrorist recruitment efforts have increasingly turned to social media for organization, outreach and propagandizing.

The organizational possibilities available through social media are virtually priceless for terrorist organizations. Studies report that almost ninety-percent of online terrorist organizational efforts are conducted using social media. Social media leaves no paper trail and allows groups to gather together in online forums without ever having to meet in person, a tremendous tactical advantage. Furthermore, the ability to digitally “meet” online allows terrorists operatives to leverage worldwide access to potential recruitment targets with “friend” requests or video clips who would have previously been impossible to reach. Immobility no longer cripples terrorist operations. Operational activities can be planned in minute detail without ever leaving the safety of a hideout.

The secretive aspect of detailed planning is not the only organizational one-up gained through social media. The Arab Spring is an example of how, using social media, tech-savvy revolutionists can corral and direct public opinion almost instantly.  Young organizers used social media to coordinate seemingly random riots in a matter of hours. The users distributed messages through Facebook to organize riots that appeared to have spontaneously materialized. This organizational capability provided anonymity for movement leaders and the advantage of complete surprise.

Social media has opened the floodgates of unrestricted information sharing and unleashed a deluge of digital information. Terrorist groups have effectively channeled their own flow of outreach-oriented material into this stream of information. The materials disseminated by terrorist organizations through social media are typically not page-long manifestos that rail against the West. Most often, social media is used to distribute small pieces (short video clips, Twitter updates, photos, or Facebook status updates) of information en masse. These snippets of information or events often provide better and quicker updates than official news sources; they construct a compelling and intimate view of events. Terrorist organizations can strategically produce nuggets of propaganda to produce an empathy-invoking storyline that shows a different reality than the one portrayed by CNN, BBC, or other news outlets. Videos of CIA drone strikes on villages evoke stronger anti-American sentiments than a thirty-page document that highlights terrorist ideology (although these can be found online as well).

Breaking historical precedent and bypassing traditional news outlets, the Israeli Defense Force recently engaged in an online live-update quarrel with the terrorist group Hamas. The two groups competed verbally over Twitter during a period of intensifying physical violence in Gaza. The updates shocked the world as Twitter facilitated discussion between hate-filled factions. Both groups gave intimate military updates that included messages like “A short while ago, 5 IDF soldiers were wounded by a rocket fired from #Gaza into #Israel.” Hamas responded with similar updates and accusations against Israel. The entire episode was captured in real time and subsequently used by each group for their own propaganda purposes.  Occurrences like these are what contribute to the outreach value of social media. Each Twitter update offered by Hamas or the IDF was highly intentional and strategically aimed at informing the world for a specific cause. The outreach capabilities of social media are almost endless and put terrorist groups like Hamas on a level propaganda playing field with larger and more sophisticated military organizations.

Social media provides a thick level of anonymity for smart users. Once terrorist groups adopt the mask of a friendly social media profile they become virtually impossible to distinguish from the hundreds-of-millions of other users. Motivations and intentions can be disguised through a profile, account or channel that appears normal and socially integrated. This is especially true in an age where social normalcy is increasingly judged through the use of online forums and technological proficiency. Terrorist groups can easily use faux profiles to impart a relatable sense of familiarity or companionship with other users, though their actual intentions are focused on conversion and indoctrination. Simply put, terrorist can and are using social media to get a foot in the door with impressionable Westerners.

Raised in quiet Oakton, VA, Zachary Chesser quickly made headlines with his bold online support of terrorist activities and his threat against the creators of the comedy show South Park for their cartoon portrayal of the prophet Muhammad.  Chesser became a Muslim convert in 2008, shortly after his high school graduation. Chesser’s case is significant because of his alarmingly quick path towards supporting jihadi activities. Chesser’s indoctrination and verbal support for terrorist activities happened almost exclusively online. The Internet was a key factor in his turn from passive discontent to actively supporting radical action. Chesser watched and commented on countless videos posted by terrorist groups operating in Somalia and the middle-east. The videos depicted gruesome events like roadside bombings and decapitations. As Chesser became increasingly detached from reality and absorbed in his online jihadi fantasy, he began to feel guilty at his own lack of radical participation.

Chesser lamented his guilt in a blog and pleaded with his Islamic brothers to “not forget those of us who have lagged behind.” Eventually, Chesser’s extreme devotion to the Islamic cause – strongly encouraged by hours spent online in Islamic chat-rooms – prompted him to act. He was arrested by federal authorities in July 2010 when he attempted to fly to Somalia and link up with Islamic terrorist group Al-Shabab. Chesser’s friends commented that his Islamic identity was one of many “identities” he had tried and subsequently abandoned. Social media provided the perfect forum for Chesser to experiment with his new-found Islamic personality. From the safety of his own bedroom, Chesser could hide behind the stern exterior of committed Islamic dogmatism. The effective Internet propagandizing and outreach of Somali terror groups, however, quickly pulled Chesser into their reality and destroyed his life.

Omar Hammami (Abu Mansour al Amriki) is perhaps the best known American convert to Islamic terrorism since 9/11. Like Chesser, Hammami was born and raised in a quiet southern town. Hammami spent his teen years in uneventful and quintessentially southern Daphne, Alabama. Hammami was introduced to Islam in the seventh grade and quickly became enthralled with its teachings. He remained a devoted Muslim throughout high school and shortly after graduation he moved to Toronto with a close friend and fellow convert. Hammami was afflicted by his non-action regarding Jihad and after moving to Egypt he eventually connected with Al-Shabab. Hammami rose rapidly through the ranks of Al-Shabab and is now a key asset to their continued success.

Hammami’s value to Al-Shabab extends far beyond his sharp mind and military capabilities. Since joining Al-Shabab, Hammami has continued to post videos of his exploits on Youtube and Islamic blogs. The videos have garnered wide-spread international attention. Hammami uses the videos to inform would-be terrorists about the activities of Al-Shabab and to encourage those who have hesitated to take action – those like Chesser. His videos have successfully allowed Westernized Muslims to relate with terrorist groups. Hammami’s distinctly Western speech and mannerisms appeal to young Islamists who dream of contributing to jihad. Official estimates indicate that federal authorities have stopped dozens of young Muslims en route to Somalia to join Al-Shabab. These individuals were directly influenced by Hammami’s legend and Internet video propagandizing.

Hammami’s recently published personal biography has been especially effective in relating to young Westerners. Hammami discusses at length his struggle with feelings of exclusion and hatred after converting to Islam at a young age. He released his biography online and it was digitally distributed around the globe. Hammami’s story is romanticized in his biography and portions of it have flooded through pro-Islamist social media networks. The cathartic portrayal of Hammami’s journey from American southern life to dedicated Islamic terrorist is immensely powerful propaganda.

Awlaki, like both Chesser and Hamammi, was born in the United States. Before his death in 2011, Awlaki was hailed as the foremost spokesman for Al-Qaeda. Awlaki was a respected cleric with monumental influence who used the Internet extensively for propaganda efforts. He was adept at combining colloquial Western insights with Islamic teachings. The ability to briefly and lucidly illuminate fundamental tenets of Islamist theology to English speaking Westerners made Awlaki successful and famous. Al-Qaeda’s ranks have benefited from Awlaki’s online success and his death and legacy ensure that the terrorist group will continue to use the Internet for large propaganda operations.

Awlaki used social media as tool in building inroads with dedicated Islamists throughout the world. He also reached out to individuals who were simply seeking information about Islam or perusing the religion out of curiosity. Awlaki was dangerous because he could simultaneously disciple radical jihadists like the Fort Hood shooter (Nidal Hasan) and capture new converts or interested individuals with his relatable style and distinct Western knowledge.

Scholars note that many of Awlaki’s followers – some of whom later turned radical – were able to live double lives over social networking websites. Dedicated social media users can thrive in the duality between reality and their “devoted” Islamic profiles. Some call this duality the “replication of self.” Awlaki tapped into this realm and encouraged his followers towards greater Islamic devotion. Social networking websites embolden users and can (as shown in Chesser’s case) lead them to action if their convictions are strengthened through isolation and online indoctrination.

How has the government responded to the use of social media by terrorist groups? Largely, many governments have focused on monitoring chat-rooms, websites and broad social media trends. The gargantuan amount of data transferred through social media makes specific threats difficult to identify. Private computer engineering companies are hastily developing trend-finding software that will assist the government in analyzing the massive amount of information available through these forums. These programs help in tracking larger usages, but solitary users can still evade detection if they are careful to monitor their Internet trail.

The government does not always shut down terrorist sites. Closing down terrorist accounts or profiles could result in the loss of pertinent information for counterterrorism activities. Instead, authorities can monitor the traffic and content of these sites for indications of action or planning. Furthermore, many terrorist sites are just un-inflammatory enough for it to qualify as protected speech.

Some governments are cleverly adapting to the advantages offered by social media. Specifically, the Israeli Defense Force has released a series of succinct, simple and well-produced videos explaining the reasons and basic strategy behind operation Pillar of Defense. These videos were posted on Youtube and provide a clear and rational explanation of why and how Israel is responding to Hamas’ missile attacks.

With appropriate government participation in social media and related internet forums, the effect of social media as a terrorist outreach tool can be diminished. Between a healthy online presence and the development of terrorist finding web-analytics, world governments should be able to prevent the internet from becoming the ultimate terrorist hideout. From there, the government’s interaction with the internet and social media can help to work against terrorist threats who try to use social media to organize and propagandize.

Sources and further reading on terrorism’s interaction with the internet, and social media:

As rival gangs of Jews and Arabs clash on streets, fears mount of irreparable damage to Israeli society